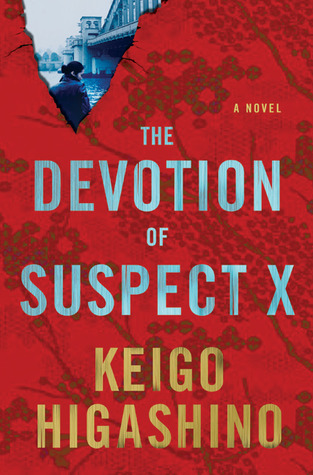 Higashino won Japan’s Naoki Prize for Best Novel with this stunning thriller about miscarried human devotion, a bestseller in Japan. Yasuko lives a quiet life, working in a Tokyo bento shop, a good mother to her only child. But when her ex-husband appears at her door without warning one day, her comfortable world is shattered. When Detective Kusanagi of the Tokyo Police tries to piece together the events of that day, he finds himself confronted by the most puzzling, mysterious circumstances he has ever investigated. Nothing quite makes sense, and it will take a genius to understand the genius behind this particular crime…

“Higashino won Japan’s Naoki Prize for Best Novel with this stunning thriller about miscarried human devotion, a bestseller in Japan. The author successfully combines unquestionable reasoning with unquenchable pain. In this brutally laconic translation, cold logic battles warm hearts throughout this elegant proof of the wages of sin, in which everyone suffers and no one can ever win.” —Publishers Weekly (starred review)

“Winner of Japan’s prestigious Naoki Prize and a bestseller there with more than two million copies sold, this literary psychological thriller is a subtle and shifting murder mystery. It will make readers redefine devotion and trust in an otherwise complete stranger.” —Library Journal (starred review)

Keigo Higashino is a Japanese author mystery novels, essays, and story books for children. Born in Osaka, he started writing novels while still working as an engineer at Nippon Denso Co. (presently DENSO). He won the Edogawa Rampo Award, which is awarded annually to the unpublished finest mystery work, in 1985 for the novel Hokago (After School) at age 27. Subsequently, he quit his job and started a career as a writer in Tokyo.In 1999, he won the Mystery Writers of Japan Award for the novel Naoko, which was translated into English by Kerim Yasar and published by Vertical Inc. in 2004. In 2006, he won the 134th Naoki Prize for The Devotion of Suspect X. Its English translation was nominated for the 2012 Edgar Award for Best Novel and the 2012 Barry Award for Best First Novel. He is the President of Mystery Writers of Japan.

The Devotion of Suspect X is available for immediate purchase via these links to Amazon.com and Amazon.de. When you make a purchase via this website, a percentage of the price goes right back into site maintenance and development. Thanks for the support!