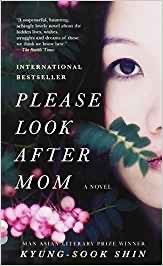 “Shin renders a tender and beautiful portrait of South Korea, but the novel recognizes a familial dilemma experienced throughout the world.” – Ms. Magazine blog

When sixty-nine-year-old So-nyo is separated from her husband among the crowds of the Seoul subway station, her family begins a desperate search to find her. Yet as long-held secrets and private sorrows begin to reveal themselves, they are forced to wonder: how well did they actually know the woman they called Mom?

Told through the piercing voices and urgent perspectives of a daughter, son, husband, and mother, Please Look After Mom is at once an authentic picture of contemporary life in Korea and a universal story of family love.

Kyung-sook Shin is the author of numerous works of fiction and is one of South Korea’s most widely read and acclaimed novelists. She was the first woman to be awarded the Man Asian Literary Prize (for Please Look After Mom), and she has also been honored with the Manhae Literature Prize, the Dong-in Literature Prize, and the Yi Sang Literary Prize, as well as France’s Prix de l’Inaperçu. Please Look After Mom is her first book to appear in English. It will be published in twenty-nine countries and has sold over 2 million copies in South Korea alone.

Chi-young Kim is a Korean English literary translator who lives in the United States. Originally having trained as a lawyer and translating as a hobby, Kim later became a professional literary translator. Her work includes the English translations of the award-winning novels Please Look After Mom by Kyung-sook Shin and The Hen Who Dreamed She Could Fly by Hwang Sun-mi.