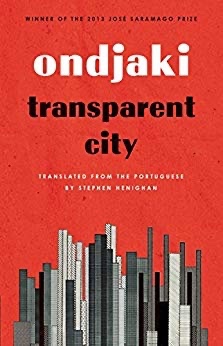 “The novel begins and ends with a raging inferno, and yet it is as full of hope, appetite and libidinal energy as it is of grief and mourning.” – Times Literary Supplement

In a crumbling apartment block in the Angolan city of Luanda, families work, laugh, scheme, and get by. In the middle of it all is the melancholic Odonato, nostalgic for the country of his youth and searching for his lost son. As his hope drains away and as the city outside his doors changes beyond all recognition, Odonato’s flesh becomes transparent and his body increasingly weightless.

A captivating blend of magical realism, scathing political satire, tender comedy, and literary experimentation, Transparent City offers a gripping and joyful portrait of urban Africa quite unlike any before yet published in English, and places Ondjaki, indisputably, among the continent’s most accomplished writers.

Ondjaki was born in Angola in 1977. He studied sociology in Lisbon and attended film school in New York. He is the author of three novels and three short story collections, in addition to two collections of poems and a book for children. Ondjaki’s novels and stories have been translated into English, French, Spanish, German and Italian. His novels Good Morning Comrades and Granma Nineteen and the Soviet’s Secret were published in English in North America by Biblioasis. He lives in Luanda and has made a documentary film about his native city.

Stephen Henighan was born in Hamburg, Germany and has lived, worked, and traveled in many countries. He earned a B.A. in political science from Swarthmore College in Pennsylvania, an M.A. in English literature and creative writing from Concordia University in Montreal, and a D.Phil. in Spanish American literature from the University of Oxford. He is an award-winning writer of fiction and nonfiction. Henighan currently teaches Spanish American literature at the University of Guelph, Ontario.