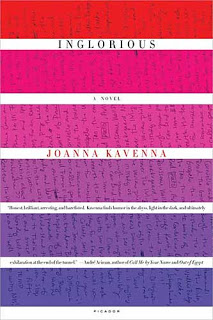 An erudite and darkly comic novel, brimming with lacerating wit and compassion, Inglorious is a truly engrossing character study of a woman walking the edge between self-destruction and self-discovery. When Rosa Lane, a promising young journalist, impulsively hits the send button on an email to her boss saying “I quit,” so begins her pursuit of enlightenment in the jungles of cutthroat London. As she embarks upon her quest for a sense of purpose, she is deceived by her lover, surprised by her friends, turned out by her roommate, threatened by her bank manager, picked over by prospective employers, and tormented by all the bizarre expectations of the modern world. An erudite and darkly comic novel, brimming with lacerating wit and compassion, Inglorious is a truly engrossing character study of a woman walking the edge between self-destruction and self-discovery.

Inglorious was shortlisted for the John Llewellyn Rhys Prize in 2007 and won the Orange Broadband Award for New Writers. Joanna Kavenna grew up in various parts of Britain, and has also lived in the USA, France, Germany, Scandinavia and the Baltic States. Her first book The Ice Museum was about travelling in the remote North, among other things. Her second novel, Inglorious, was followed by a novel called The Birth of Love, which was longlisted for the Orange Prize. Her latest is a satire called Come to the Edge. Kavenna’s writing has appeared in the New Yorker, the London Review of Books, the Guardian and Observer, the Times Literary Supplement, the International Herald Tribune, the Spectator and theTelegraph, among other publications. She has held writing fellowships at St Antony’s College, Oxford and St John’s College, Cambridge. She was named as one of the Telegraph’s 20 ‘Writers under 40’ in 2010, and included in the Granta’s Best Of Young British novelists list in  2013. She has most recently been the Writer-in-Residence at St Peter’s College, Oxford.

Inglorious is available for immediate purchase via these links to Amazon.com and Amazon.de. When you make a purchase via this website, a percentage of the price goes right back into site maintenance and development. Thanks for the support!