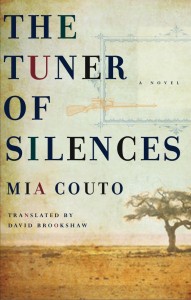 The eighth novel by the internationally bestselling Mia Couto, The Tuner of Silences is the story of 11-year-old Mwanito’s struggle to reconstruct a family history. Mwanito was eleven when he saw a woman for the first time, and the sight so surprised him he burst into tears.

Mwanito has been living in a former big-game park for eight years. The only people he knows are his father, his brother, an uncle, and a servant. He’s been told that the rest of the world is dead, that all roads are sad, that they wait for an apology from God. In the place his father calls Jezoosalem, Mwanito has been told that crying and praying are the same thing. Both, it seems, are forbidden.

The eighth novel by the internationally bestselling Mia Couto, The Tuner of Silences is the story of Mwanito’s struggle to reconstruct a family history that his father is unable to discuss. With the young woman’s arrival in Jezoosalem, however, the silence of the past quickly breaks down, and both his father’s story and the world are heard once more.

The Tuner of Silences has been published to acclaim in more than half a dozen countries. Now in its first English translation, this story of an African boy’s quest for the truth endures as a magical, humanizing confrontation between one child and the legacy of war.

“Quite unlike anything else I have read from Africa.””—Doris Lessing

“By meshing the richness of African beliefs . . . into the Western framework of the novel, he creates a mysterious and surreal epic.”—Henning Mankell Mia Couto, born in Beira/Mozambique in 1955, is among the most prominent writers in Portuguese-speaking Africa. After studying medicine and biology in Maputo, he worked as a journalist and headed first the AIM news agency, then the daily newspaper Notícias de Maputo, and finally the weekly Tempo. Mia Couto has been awarded several important literary prizes. In 2013, Mia Couto was awarded the Camões Prize for Literature.

The Tuner of Silences is available for immediate purchase via these links to Amazon.com and Amazon.de. When you make a purchase via this website, a percentage of the price goes right back into site maintenance and development. Thanks for the support!